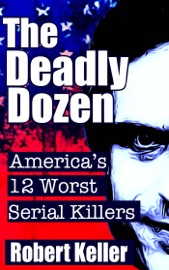 David Berkowitz: Known as the “Son of Sam,” Berkowitz was a deeply disturbed young man who prowled the streets of New York dispensing death with his .44 caliber revolver.

William Bonin: One of a trio of deadly psychopaths who trawled the freeways of Southern California during the late 70’s and early 80’s. Bonin was a depraved child killer who abducted, raped and tortured more than 20 teenaged boys.

The Boston Strangler: Albert De Salvo took the fall but most experts agree that he was not the Strangler. So who was the real killer? And how did he get away with the series of brutal murders that so terrified the citizens of Boston?

Ted Bundy: Charming, intelligent and lethal, Bundy is America’s most notorious serial killer, a deadly fiend who cut a swathe of destruction across the country, raping, killing and committing necrophilia on his young victims.

Dean Corll: Along with two willing teenaged accomplices, Corll orchestrated what was at the time the biggest murder spree in American history, raping torturing and killing at least 25 young boys.

Jeffrey Dahmer: Hideously depraved killer who preyed on young homosexual men in Milwaukee, Wisconsin, cannibalizing them and conducting bizarre experiments on their bodies.

Albert Fish: He looked like a frail old man, but Albert Fish was actually a psychotic child killer and torturer, with a taste for human flesh.

John Wayne Gacy: Cold-hearted killer who raped, tortured and strangled at least 33 young men, burying their bodies in the crawlspace of his Chicago house.

Randy Kraft: The least well known of California’s three “Freeway Killers.” And yet Kraft was both the most prolific and the most depraved, responsible for the torture killings of as many as 67 young men.

Dennis Rader: Known as the “BTK Killer” (after his M.O.: Bind, Torture, Kill) Radar held the citizens of Wichita, Kansas in a state of fear for over 30 years, during which time he claimed 10 known victims.

Richard Ramirez: A satanic burglar who went by the terrifying sobriquet, “The Night Stalker,” Ramirez raped, battered, shot and stabbed his victims during a bloody reign of terror in 1980’s Los Angeles.

Gary Ridgeway: As the horrific “Green River Killer,” Ridgeway engaged the Washington police in a deadly game of cat and mouse, claiming more that 60 victims over two decades.