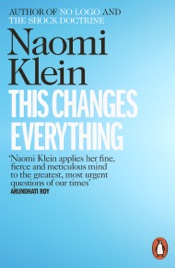 From Naomi Klein, author of the #1 international bestsellers, The Shock Doctrine and No Logo, a must-read on how the climate crisis needs to spur transformational political change

We seem to have given up on any serious effort to prevent catastrophic climate change. Despite mounting scientific evidence, denialism is surging in many wealthy countries, and extreme fossil-fuel extraction gathers pace. Exposing the work of ideologues on the right who know the challenge this poses to the free market all too well, Naomi Klein also challenges the failing strategies of environmental groups. This Changes Everything argues that the deep changes required should not be viewed as punishments to fear, but as a kind of gift. It's time to stop running from the full implications of the crisis and begin to embrace them.

Naomi Klein is an award-winning journalist, syndicated columnist and author of the international bestsellers, The Shock Doctrine and No Logo. She is a member of the board of directors for 350.org, a global grassroots movement to solve the climate crisis, a Puffin Foundation Writing Fellow at The Nation Institute, and a former Miliband Fellow at the LSE. She holds an honorary Doctor of Civil Laws from the University of King's College, Nova Scotia.
Top Reading Die Chroniken von Peter Pan - Albtraum im Nimmerland Rache Die Sternenbucht Ohne Schuld That Time I Got Reincarnated as a Slime, Vol. 11 (light novel) 365 Tage Die verschwundene Schwester Fifty Shades of Grey - Geheimes Verlangen