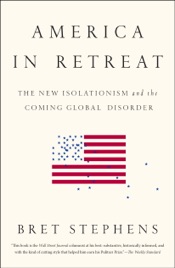 The world is tipping into chaos. Why?

In this acclaimed and influential book, Pulitzer Prize–winning columnist Bret Stephens shows how the retreat of American power, orchestrated by Barack Obama, has created the power vacuums now being filled by our enemies. From Vladimir Putin’s quest to restore the old czarist empire, to China’s efforts to dominate the South China Sea, to Iran’s nuclear ambitions, to ISIS’s dreams of an Islamic caliphate, we have entered an era in which our foes no longer fear us and our friends no longer trust us.

With his stylistic flair and analytical brilliance, Stephens explains the ideological roots of Obama’s suspicions of American power. He demonstrates how a false belief in Ameri­can decline has led to a disastrous prescription of retreat, as if the cure for domestic weak­ness is international weakness. In a prophetic chapter, he warns of what the world could look like in 2019 if we do not change course. And he lays out the right formula for U.S. foreign policy—the same formula that brought order to our once crime-ridden streets.