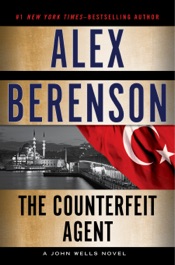 “Berenson’s strength is his deep understanding of geopolitics and of the shoddy compromises it demands. He clearly has excellent contacts in the world of shadows. Wells is a complex and satisfying protagonist, tackling bad guys across the world’s conflict zones.”--The New York Times Book Review

John Wells goes undercover as the threat of nuclear war skyrockets between the United States and Iran, in the cutting-edge new novel from the #1 New York Times–bestselling author.

In an Istanbul hotel, a deep source warns a CIA agent that Iran intends to kill a CIA station chief. Quickly, John Wells is called in to investigate, but before he can get far, the tip comes true. Which means that the next warning the source gives will be taken very seriously indeed. And it’s a big one. We’ve put a package on a ship from Dubai to the United States. A radioactive one. A bomb? Not yet. It’s a test run.

As the threat level jumps and the government mobilizes, something still doesn’t smell right to Wells’s old CIA boss Ellis Shafer, and so he sends Wells on a private mission to find out what’s going on. But the two of them are swimming against the tide. From Guatemala to Thailand to Hong Kong to Istanbul, Wells uses every skill he has, including his ability to go undercover in the Arab world, to chase down leads. But it might not be enough. Soon there might be nothing anyone can do to pull the United States back from the brink of war.
Top Reading Die Chroniken von Peter Pan - Albtraum im Nimmerland Freed - Fifty Shades of Grey. Befreite Lust von Christian selbst erzählt Rache Fifty Shades of Grey - Geheimes Verlangen Die verschwundene Schwester Die Sternenbucht 365 Tage Dear Enemy