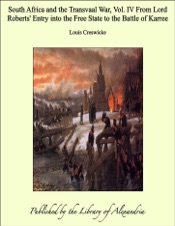 The terrible events of the month of December had produced a disquieting effect upon the public mind. Agitated questions were asked on all subjects connected with the series of catastrophes, and the replies were so unsatisfactory that one and all became sensible that the actions of those in power were not sufficiently in unison with public sentiment, and even the keenest supporters of the Government numbly experienced a loss of confidence in those at the helm. It was felt that some one must be to blame for the miserable condition of affairs, the hideous series of defeats that had made Great Britain an object of ridicule on the Continent. For the forwarding of our troops “in driblets,” for the ineffectiveness of our guns in comparison with Boer weapons, for the uselessness of the carbine in competition with the Mauser, for the scarcity of horses, for the preparedness of the Boers, for the unpreparedness of the British, for the under-estimation of the strength of the enemy, and for many other things which tended to bring about the national disaster, various members of the Government were blamed. Charges of incapacity were levelled at the Secretary of State for War, the War Office, and the Committee of National Defence. Even the stoutest Tories were found declaiming against the attitude of lethargy—flippancy, some said—adopted by those in whose hands the fate of the nation rested. Mr. Balfour, in certain speeches somewhat ill-advisedly delivered at a critical moment, had contrived almost to wound people who were already deeply wounded by humiliation and anxiety. His mood had not been in sympathy with the public mood. He had endeavoured to brush away the stern problems facing him by minimising their seriousness, by affecting to believe that the Government was, like Cæsar’s wife, beyond reproach. His attitude implied that the Cabinet could do no wrong, and that the misfortunes and errors (if errors there were) were due to a concatenation of circumstances for which neither the Government at home nor the generals abroad could be held responsible. In consequence of this attitude, on one side Mr. Balfour was blamed, on another, Mr. Chamberlain. The Colonial Secretary was accused of the policy of “bluffing with a weak hand,” while the Chancellor of the Exchequer, as was inevitable, came in for his share of obloquy. It was the cheeseparing principle that was at the bottom of it all; cheeseparing and red-tape were responsible for debility and delay of all kinds, and political inertia had undoubtedly spelt defeat. The clamour was reasonable and just. It was felt that prudence and energy should have served as fuel to stoke the engine of public affairs, not as a brake to be put on in the face of disaster. On all hands the public of one consent cried for a new broom and “a great co-ordinating guiding mind,” and the universal clamour awoke the Government to a consciousness that there are times and seasons in the history of nations when party recriminations and crystallised party etiquette must give way before the stress of a great national need—the need to preserve at all costs the honour and the reputation of the Empire in face of the whole world.
The Well of Ascension Go Tell the Bees That I Am Gone Ashton: Lord of Truth Seducing Miss Dunaway (a Victorian Romance) Lord No One to Trust Lord Hathaway's Bride Lord Jim