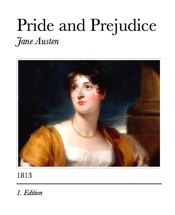 Pride and Prejudice Books in most ereader formats - The Author
There was nothing of the literary woman in the external affairs of her life and its conduct. Born on 16 December, 1775, at Steventon in Hampshire, of which her father was rector, and dying at Winchester on 18 July, 1817, she passed the intervening years almost entirely in the country. She lived with her family in Bath from 1801 to 1806, and at Southampton from 1806 to 1809. Later, she paid occasional visits to London where she went not a little to the play; but she never moved in “literary circles,” was never “lionised” and never drew much advantage from personal contact with other people of intellect. From 1811 until 1816, with the release of Sense and Sensibility (1811), Pride and Prejudice (1813), Mansfield Park (1814) and Emma (1816), she achieved success as a published writer. She wrote two additional novels, Northanger Abbey and Persuasion, both published posthumously in 1818, and began a third, which was eventually titled Sanditon.

The Novel
Pride and Prejudice is Jane Austen’s most brilliant work. The wit in it sparkles. To Jane Austen herself, Pride and Prejudice was “her own darling child.” With subsequent generations, it has been the most popular of her novels, but not because of Elizabeth or Darcy, still less for sweet Jane Bennet and her honest Bingley. The outstanding merit of the book is its witty exposition of foolish and disagreeable people: Mr. Bennet (he must be included for his moral indolence, however he may delight by his humour), Mrs. Bennet, Elizabeth’s younger sisters, Lady Catherine de Bourgh, best of all, Mr. Collins. Taken by itself, this study of a pompous prig is masterly; but, in Pride and Prejudice, nothing can be taken by itself. The art of the book is so fine that it contains no character which is without effect upon the whole; and, in a novel dealing with pride and with prejudice, the study of such toadyism and such stupidity as that of Mr. Collins gives and gains incalculable force.

Sir Walter Scott, March 14, 1826 — Also read again, and for the third time at least, Miss Austen’s very finely written novel of Pride and Prejudice. That young lady had a talent for describing the involvements and feelings and characters of ordinary life, which is to me the most wonderful I ever met with. The Big Bow-wow strain I can do myself like any now going; but the exquisite touch, which renders ordinary commonplace things and characters interesting, from the truth of the description and the sentiment, is denied to me. What a pity such a gifted creature died so early!

Letitia Elizabeth Landon in "Romance and Reality", Chapter 17, 1831: ― Mr. Morland.― "I prefer Miss Austen's; they are the truest pictures of country life, whose little schemes, hopes, scandals, &c. are detected with a woman's tact, and told with a woman's vivacity."
Edward Lorraine.― "Yes, they are amusing to a degree; but her pen is like a pair of skates ― it glides over the surface; you seek in vain for any deep insight into human thought or human feeling. Pride and Prejudice is her best work; but I cannot forgive Elizabeth for her independence, which, in a woman, is impertinence; and Mr. Darcy is just a stiff family portrait, come down from its frame to be condescending.

Mark Twain - Letter to Joseph Twichell, 13 September 1898 ― I haven't any right to criticise books, and I don't do it except when I hate them. I often want to criticise Jane Austen, but her books madden me so that I can't conceal my frenzy from the reader; and therefore I have to stop every time I begin. Every time I read Pride and Prejudice I want to dig her up and beat her over the skull with her own shin-bone. PDF / Kindle / ePub
El invierno más largo Porque tú eres mi crush El corazón de una Bridgerton (Bridgerton 6) François Truffaut La vida es sueño A Little Christmas Faith (Choc Lit) Liberado («Cincuenta sombras» contada por Christian Grey 3) Invisible Tal vez tú El verano que volvimos a Alegranza