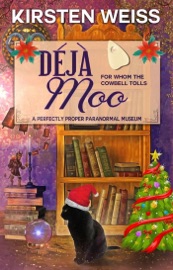 A holiday tradition turns deadly, but is the paranormal museum to blame?

Maddie Kosloski is no fan of San Benedetto's Christmas Cow, a thirty-foot straw bovine that graces the town square every December. For one thing, the cow displaces her paranormal museum as the number one tourist attraction. Plus, every year, despite around-the-clock surveillance, the cow goes up in flames.

But this year, there's more than just a fire blazing in Maddie's wine-country hometown. One of the Christmas Cow guards has been found with an arrow in his chest, and Maddie's new haunted cowbell exhibit is fueling a panic. Are the spirits in her museum getting too hot to handle? If Maddie can't stop the hysteria—and the murderous archer—her holiday plans might not be the only thing full of holes.